The course will be defined as shown in the diagrams below. (This may vary slightly depending on surface conditions). This includes the competition track(s), the pit area, spectator area, and access routes from the lake edge to the defined areas.
All areas and access routes will be clearly defined by suitable temporary signage, bunting or other approved methods to ensure all participants and spectators are aware of the approved locations for vehicles to be driven, parked and where foot traffic is permitted. Designated non-access areas will be clearly defined and signposted. Anything to the west of the pits can be considered prohibited.

The DLRA offers 2 tracks for Speed Week. Both tracks are timed by the same state of the art TAG Heuer clocks and wireless data radios.

There are prescribed conventions for where a vehicle exits at the end of a run on Track 1. Exit points are clearly marked and are usually at the half mile. When exiting, vehicles must go past the clearance flags before the track is considered clear and the next competitor can run down the track.

Vehicles on track 1 turn out to the right when they have completed their run and follow the return road back to the start.

If a vehicle experiences difficulties on track 1 and requires the attention of the fire and rescue teams they turn out to the left.

Support vehicles must use the designated track provided to travel from the track 1 start line to retrieve their vehicle. As they travel past the pits they are restricted to 80 kph.

Track 2 is used for cars up to 150 mph and motorcycles up to 175 mph. It is also the track used by rookies for their first pass and for cars to do their 125 mph and 150 mph licensing passes and motorcycles to do their 125 mph, 150 mph and 175 mph licensing passes. There is a timing traps between the 2 mile and 2 1/4 mile, the 2 mile and the 3 mile.
There are prescribed conventions for where a vehicle exits at the end of a run on Track 2. Vehicles on track 2 turn out to the left when they have completed their run and follow the return road back to the start. They must go past the clearance flags on the return road be fore the track is clear and the next competitor can run down the track. If a vehicle experiences difficulties on track 2 and requires the attention of the fire and rescue teams they turn out to the right.

Spectators must travel on the access roads shown in grey and park on a trap in the designated spectator areas only. 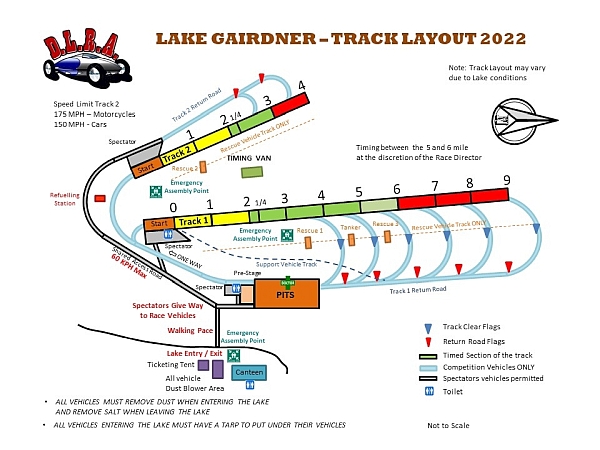 10 vehicles are sent to the Start Line from Pre-Stage. They must form a queue in single file in the left or right-hand preparation lanes. Support vehicles can park off to the side.

Once you are in the queue you are under the direction of the starter and his assistants.

NOTE: there is a dedicated re-fueling area at the back of the Start Line. If a vehicle has to be refueled, this is where it is done. There is a fireproof ground cover and appropriate fire extinguishers located here. 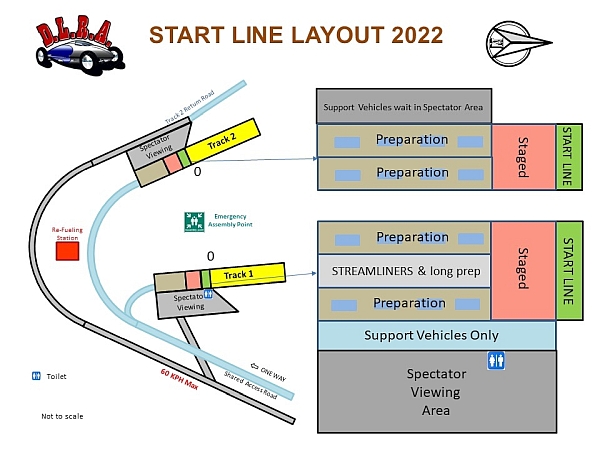 Entrance to the pits is from the eastern side.

Pre-Stage is located at the southern end of the pits.

Impound is located in the Technical Inspection lanes.

Doctors station is located on the west-side, next to Merchandise.

Registration and Pit Control are located mid-way, on the west-side of the pits.

Any vehicle traveling in the pit area is limited to walking pace, this will be strictly enforced. 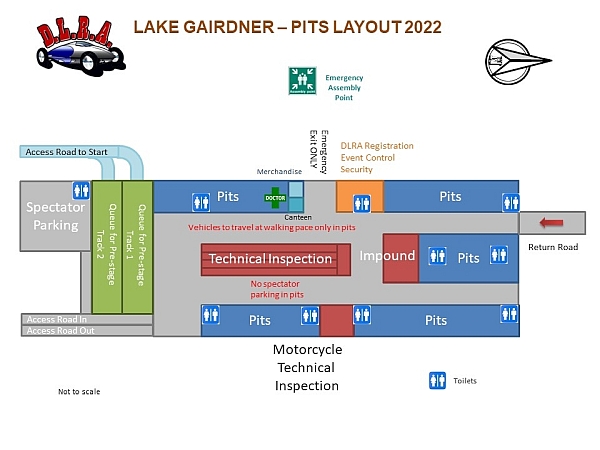 The 2010 layout introduced a second track for the first time and the removal of the Test 'n Tune Track. GPS units were used to determine a top speed on this 3 mile track. These speeds were not recognised for setting records and were only recorded to the first 2 decimals. It proved to be very popular for licensing runs but was usually closed by the Thursday as most competitors had moved to the main track to set recognised runs.

The track runs roughly South to North there is 3 miles of run up, 3 timed miles and then 3 marked miles for slowing down. The pits are located centrally between the track and the shore on the east side of the track. All the timing equipment and the van are on the west side of the track, away from any traffic.