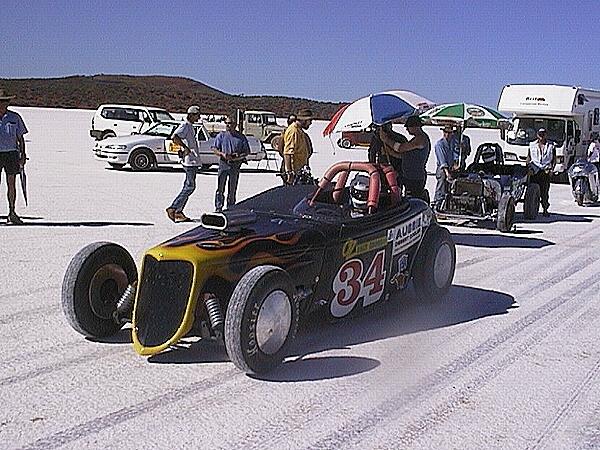 Norm and partner Vicki Howard first headed for the salt in Norm's work truck, a Holden FJ ute. Runing in the E/GP class it did a very respectable 112.240MPH. The salt bug had bit and they would be back.

In 2000 they returned with a totally new car, a B/GR 1934 Ford roadster Norm ran a 134.952MPH and Vicki ran a 139.524MPH beating the old man. This was to be a shake down meeting for the new car and they were very pleased with thier performances, seeing the 429 was just cut out of a wreck and had no special work done to it at all. In the off season Norm had a new motor built by long time Ford engine man John Peterson. In 2001 Norm ran 162.572MPH, unfortunately Vicki wasn't able to make the trip, but Norm brought over a couple of mates (Roy Brand and Nev Anderson) who he let have a run in the roadster, who managed a 119.540MPH and 138.867 MPH respectively.

Norm and Vicki are also the people behind Aussie Desert Coolers. Specialist radiator manufacturers and repairers for the performance and restoration market.